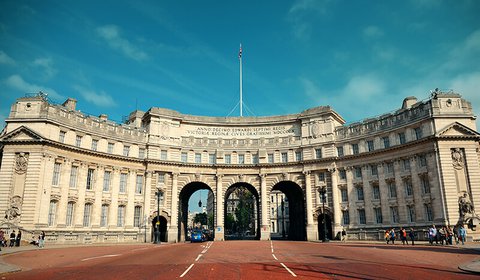 I have been doing some walking around the streets of London over the past few days, trying to keep an eye out for new things on some familiar routes. Maybe I hadn’t been paying much attention the last few times I’d passed it, but I noticed yesterday that the area surrounding the Admiralty Arch is under construction.

The arch is in a formidable location, just off Trafalgar Square at the entrance to the Mall (the thoroughfare specially designed for ceremonial parades going straight up toward Buckingham Palace). As an architectural monument, the arch is quite something. It is in fact comprised of three separate arches and a large building which straddles them (as pictured below). 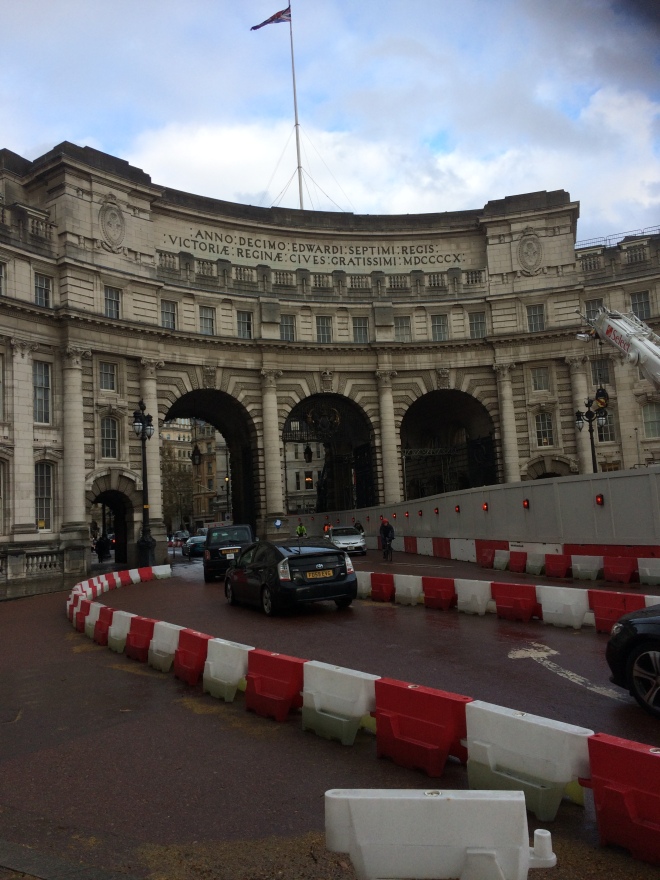 Constructed in the first decade of the twentieth century during the reign of Edward VII, the arch was designed by the prolific architect Sir Aston Webb. The arch was used for a long time as an office for the admiralty. My research tells me that under New Labour, it became a home for the Cabinet Office. In 2011, as part of the Conservative government’s public spending cuts under David Cameron, the Cabinet Office stopped using it and the arch was put up for sale on a 125 year lease.

The winning bidder – a Spanish real estate developer –  has begun the process of transforming the arch into a plush Waldorf Astoria hotel. It’s of course easy to understand why a property developer would want to snap up the arch: its views and prime location alone will no doubt make for a stunning hotel experience once it’s up and ready. And how many hotels can there be that are also architecturally imposing public monuments?

Perhaps the most characterful features of the arch are two matching sculptures – one of Navigation, one of Gunnery (pictured below: note the cannon in her lap) – which are built into its Mall-facing facade. 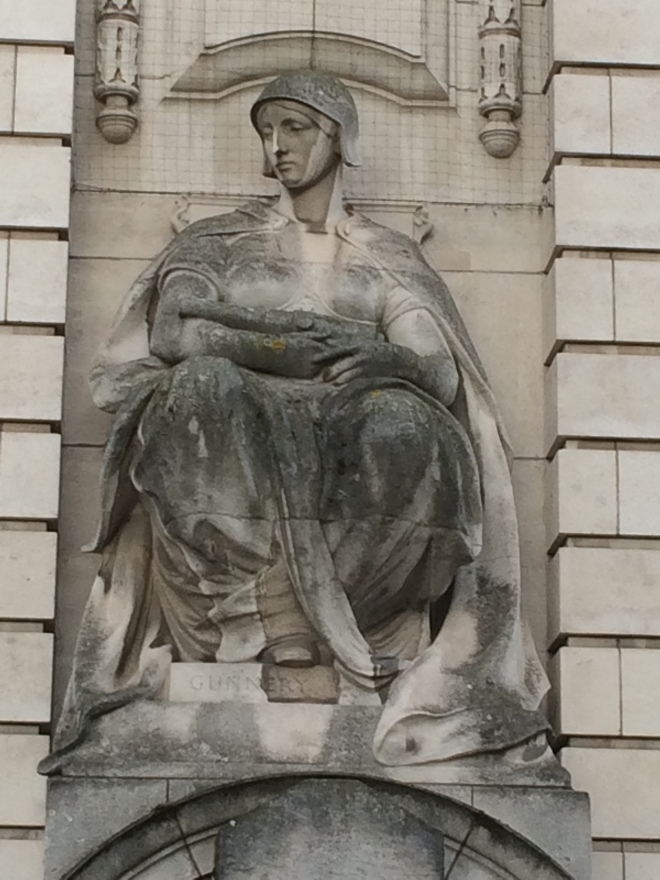 What caught my attention as I walked past the arch, though, was its Latin inscription, which can be translated as follows: ‘In the tenth year of King Edward VII, for Queen Victoria, his most grateful citizens [built this arch] 1910’. A word features in the Latin of the inscription – ‘cives’ (citizens) – that surprised me.

For London’s inhabitants and for parliament, it had long been customary to speak of themselves as (royal) subjects, not citizens. It took twentieth century statutory developments, culminating in the British Nationality Act of 1981, effectively to supersede this custom. The fact that the arch’s inscription is in Latin, and the fact that Latin doesn’t have a neat translation for the English ‘subject’, explains why ‘cives’ was used on the arch. Since the time of Thomas Hobbes in the 17th century, it transpires, the English ‘subject’ had sometimes been translated to Latin using ‘civis’.* For this inscription, other alternatives could feasibly have been preferred, however: ‘populus’ (people), for instance.

What’s interesting to me is that the arch’s use of Latin – far from being a backward-looking feature – in fact anticipates a legal development (the widespread adoption of the language of citizenship) which only becomes enshrined in law decades later.

When shifting to a more thoroughgoing legal adoption of the language of citizenship in 1981, parliament effectively replaced a term – ‘subject’, which did not feature in the legal lexicon of the ancient world – with a central legal category of ancient Rome. This ancient Roman category represented a way to achieve a legal advance.

Do any other London monuments use the (Latin) language of citizenship in this same unwittingly prophetic way? I imagine some others must, though my internet searches have turned up nothing so far.