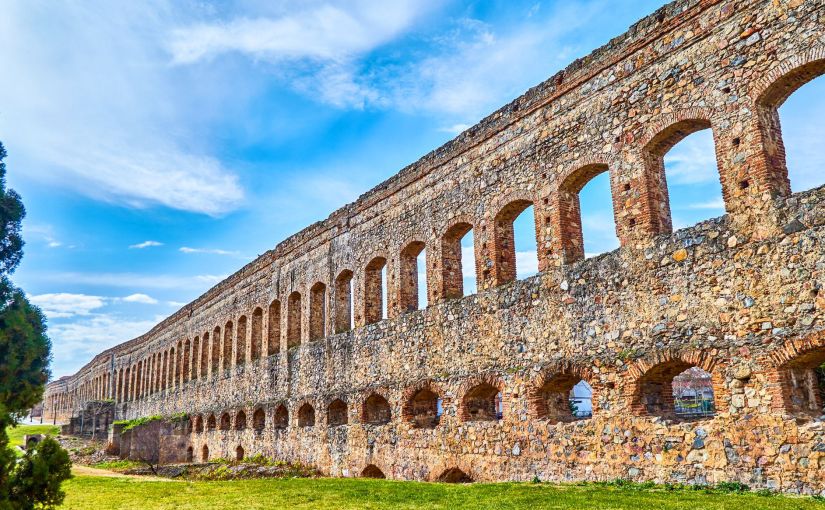 In these difficult times, I’ve found there are worse ways to maintain spirits than trying to remember fun moments in the classroom over the past term. It’s disarming to think that teachers could by now have had their last lessons in person with the pupils they’ve taught during the current academic year. Well, below, I’ve tried to record a fun portion of one of my lessons, in which discussion ranged widely – across food and drink, sea creatures, grain supply and Roman sanitation.

My year 7 class and I had been talking briefly about Roman food and drink, and about the grain-heavy diets that many ordinary Romans had. The class had recently learned about garum – Roman fish sauce – and about the Roman fondness for wine, olive oil and various other foods and tipples. We’d had a little help along the way from an amusing episode of the series, ‘What the Romans did for us’, by Adam Hart-Davis.

‘But what about delicacies?’ someone asked. Good question – so we started a discussion about the sorts of meats and seafoods that ancient Romans might (more occasionally) have eaten.

‘Octopus?’ suggested one class member. Probably not for most people, most of the time, I answered! But I do have a question for you about the octopus. ‘What is its plural?’

‘Octopi!’ This was the answer most of the group felt pretty confident with – especially since they’ve done a good job of learning their 2nd declension Latin noun endings (which have a -us ending in the nominative singular and an -i ending in the nominative plural). But a small smattering of class members tentatively suggested ‘octopuses’: octopi wasn’t the only pick.

Well, I asked, what if neither of those options is strictly accurate? Accurate, that is, if we treat ‘octopus’ as an ancient word. Confused looks.

Good, I said: this can be a little topic for you to do some research on later. Is there an additional possible plural of ‘octopus’ – and what might it be, and why?

The answer, jubilantly reported by some of the pupils in their next lesson, is that because of the Greek (not Latin) roots of octopus, the plural might best be given as octopodes.

They’d done well. Octopus does indeed have Greek roots – but, so it appears, the word doesn’t actually have an ancient provenance. Greeks certainly knew about the cephalopod we call the octopus, but the name they used for this animal was polypous (i.e. many footed creature). It was this word that Romans borrowed to give the Latin word polypus…and this is the word they used to designate the creature we know as the octopus.

It was only much later – in the 16th century. according to our best information – that the word octopus itself starts to appear for the first time, and it appears then in the English language. A nice discussion of this development is available here.

From our rather inconclusive discussion of the octopus (how should you talk about more than one of them?) we turned to start talking about a separate topic relating to Roman diet: the Roman grain supply. This was crucial for Rome’s development and stature as a city during the high period of its empire. In order to feed the vast majority of the city’s inhabitants, emperors would import huge quantities of grain, all the way across the Mediterranean, from North Africa, for ordinary people to eat. It was given out as a hand-out.

Some of the class were shocked by this revelation. ‘Free food. Really?!’ Not exactly free, of course, but to the Roman plebs, it must have felt like it. This in turn set off a conversation about how modern governments don’t really do this sort of thing – and maybe it would be helpful if they did?

I asked the class to reflect on another key area of Roman urban life that they might find surprising: hygiene. Walking into the city of Rome in the 1st or 2nd century AD, I asked, what – perhaps more than anything else – might have imposed itself on your senses. One pupil saw immediately where I was going with this question: ‘the smell’, she said.

I remember reading a passage somewhere in one of Keith Hopkins’ books where he really insists on this point. The smell on the streets of the ancient city would have been ghastly, overpowering, horrific. City dwellers in the developed world today have no point of easy comparison.

But this, I told the class, brings us to another topic you may wish to do some research about: the Roman sanitation and sewage system (particularly the Cloaca Maxima). Despite the toxic stench of their city, the Romans possessed a remarkably advanced sanitation system, featuring underground tunnels and drainage. Without this, the city would surely have smelt a whole lot worse.

I’ve noticed over the course of my time as a teacher that pupils in the 21st century classroom tend to assume that the story of historical development has been a pretty linear one of relentless progress: a sort of whiggish optimism, in other words, is pretty widespread. The history of Roman sanitation, of aqueducts and the provision of running water to urban centres, and of the Roman genius for engineering more generally, is a nice counterpoint here.

In these areas, Romans produced technologies that were not (in Europe, at least) to be matched for many centuries (over a milennium, in fact). With the demise of the Roman empire, some of the technology went out of use altogether, without being replaced by anything superior. Far from it. I’m sure my pupils now have a sense of this, even if they’re not exactly clear (as I myself am not) which word to choose if they want to talk about more than one octopus. Sometimes not even teachers have all the answers.

One thought on “Sewers and Octopodes”