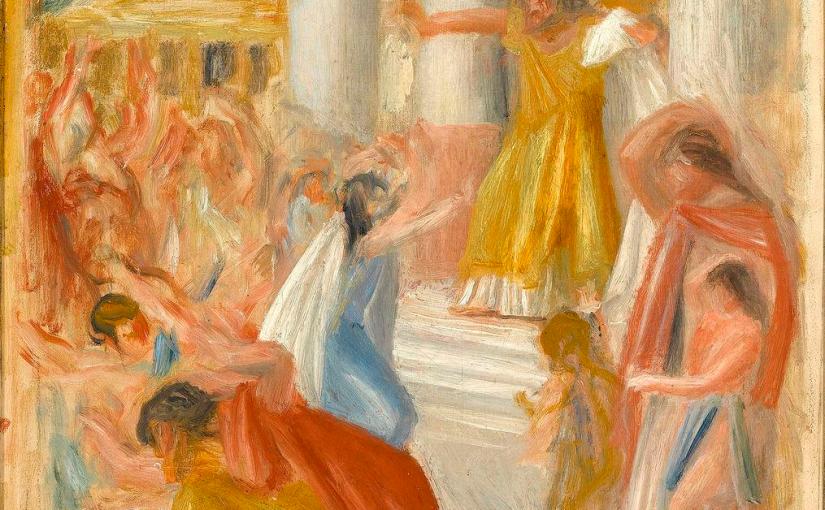 This year I find myself teaching one of the great plays of Greek theatre – Sophocles’ Oedipus the King – for the fifth year in a row for Classical Civilisation A level. Usually, teaching the same play 5 years in a row would not happen (unless one opted to do so beyond the syllabus): exam specs change frequently nowadays, and new texts are prescribed. However, Oedipus – uniquely – featured not just on the old (and much missed) AQA Class Civ A level spec for Greek theatre, but on the new OCR spec that all schools now follow. Arguably, this is no bad thing. If you were to pick a Greek play that all students should read and get to know, Oedipus would be a very good choice.

However, the fact is that now, after 5 years, I can feel myself starting to run out of steam a little with the play. Its brilliant dialogue no longer charms in quite the way it did before; its storyline doesn’t quite bewitch; and its characters don’t fascinate in the way they did a few years back. The dazzle of this great play – which it was once the highlight of my teaching week to explore with students – has dimmed a little.

Few surprises here, perhaps. You can’t expect the same level of freshness and enjoyment when you read a text – any text – time after time. At least, I can’t – and I’m surprised when others seem able to flout this (for me) cast iron law. At the same time, I’ve decided that it might be possible to do something about my fading fascination with Sophocles’ Oedipus by reading, and writing, something new about it. The current post is the first instalment of what I hope will be a short series of posts that will bear the fruit of my resolve to do just this.

For the enhancement of my appreciation of Oedipus, I am very much aware that there is no shortage of astute academic commentary available. There are some excellent pages on the play, for instance, in Simon Goldhill’s Reading Greek Tragedy, a now classic treatment written in the 1980s, which I always ask pupils to read. And there is much that is compulsively readable in the work of the American critic Charles Segal and in the lively and punchy work of Edith Hall. However, one of my personal favourite writers on all things ancient Greek – Bernard Knox – also happens to be the author of a renowned book on Oedipus, first published in 1957, that I have never before read: it’s to this text that I’ve decided to turn to reinvigorate my enthusiasm.

What I’d like to offer in this post is a journey in my reading of the first chapter of Knox’s book on Oedipus. The chapter is called ‘Oedipus the Hero’ – hence the title of this post. Rather than (just) offering a dull summary of Knox’s argument in the chapter, I’m going to try to give something of a sense also of how reading the chapter – which is very far from dull – has contributed to my pre-existing understanding of the play (it has done so in several ways).

For Knox, Oedipus the hero is, above all, a many-sided, subtly complicated character: indeed, he is ‘surely the greatest single individual in all of Greek tragedy’, Knox thinks. (We may, perhaps, take this not just as a sober scholarly judgment, but as an existential claim on the part of Knox himself: for this reader, it seems likely that it is Oedipus, above all, who manages to speak to the depths of Knox the man).

Oedipus’ tragedy, as is well known, is that, owing to a cruel turn of events to which he is initially oblivious, he has managed to kill his own father and marry his own mother. Oedipus gradually uncovers this terrible reality over the course of the play through his quizzical intelligence and his forensic questioning of others around him. He needs to find out the truth because he needs to work out who – or what – has ‘polluted’ his city, Thebes, inflicting a plague on his fellow citizens. The answer, he discovers to his horror, is that it is he, Oedipus himself, the king of Thebes, who is responsible.

Oedipus’ unfortunate fate had long ago been predicted by a grim prophecy, of which he himself had been blissfully and tragically unaware. From birth, then, he had been fated to marry his mother and kill his father, in accordance with divine diktat. Cruel Apollo had foreordained that Oedipus would do this. So Oedipus himself is his city’s pollutant – and by killing his birth-father, whom he didn’t previously realise was his birth father, Oedipus has brought Thebes to its knees. Understandably, he struggles when confronted with his new reality when he realises the truth. And he resorts to extreme self-harm – blinding himself, before leaving the city (distraught, dethroned, alone) at the end of the play.

In what does Knox think Oedipus’ greatness – his heroism – lie? In a number of things.

On one level, Oedipus embodies something of a contradiction: he is at the same time a monarch, a ruler and a despot: the solitary tyrannos in overall control of his city. It is he who makes the law, who dictates state affairs and who – single-handedly – leads the search to find the solution to his city’s plague. At the same time, he is a monarch with identifiable democratic instincts – a ‘democratic temper’, as Knox puts it. He wants what is best for his city, for his fellow citizens. He identifies with their suffering and is driven by a clear sense of public duty and public spirit. His incessant questioning in order to find a solution to the problem which confronts him is part of who he is, certainly: a self made man of action, as Knox emphasises. Self-made because he has won his kingship by freeing his city from a curse; a man of action because he is so restless to get things done. But Oedipus is certainly also motivated by unselfish instincts. And this part of his identity is very much in keeping with the spirit of fifth century democratic Athens – where Sophocles wrote, and where the play was first performed.

This much was already clear to me from my previous readings of the play. Knox, however, adds some further shrewd observations which have helped to enlarge my field of vision.

He is also fiercely intelligent: he dismisses both Tiresias the blind prophet and his own royal relation Creon as ‘stupid’ (moros) when they don’t answer his questions to his satisfaction. And he trusts his own intellect deeply. He is a forensic cross-examiner, someone who sees himself as a reasoner who can ‘beat the professionals’ (the professional in this case being Tiresias the professional prophet).

Some of these points of detail, for me, represent slightly new slants on what I had already perceived about Oedipus’ relentless questioning and his impatience with others.

Knox also offers a careful appraisal of what we might label Oedipus’ ‘tragic flaw’ (in Aristotle’s terms, his hamartia) as a character. This lies not, Knox thinks, in Oedipus’ sense of responsibility to his people, or his energy, or his anger, or in his refusal to follow his wife/mother Jocasta’s advice not to press further in his questioning. (All of these are important features of his character, but no single one of them trumps the others). Instead, Knox says, Oedipus’ actions which produce catastrophe stem from all sides of his character. The catastrophe of Oedipus is the catastrophe of the total man, and – here’s the rub – the total man is more good than bad.

That, Knox proposes, is Sophocles’ counter-intuitive proposition for his audience: a hero whose whole character is tragically flawed is nevertheless more good than bad. I hadn’t really thought to construe the character of Oedipus – or his flaw(s) in this way before. Nonetheless, I find myself feeling that Knox manages to crystallise and articulate explicitly my somewhat more inchoate understanding here: I agree with him.

Knox’s most interesting proposal, however (and here again he forces me to flesh out my understanding), is that Sophocles’ handling of the story of Oedipus needs to be set firmly within the context of religious questioning and debate in fifth century Athens. It was in fifth century Athens that the whole idea of religious prophecy had been laid open to radical question – undermined, doubted and rejected from a variety of angles. Historians like Herodotus and Thucydides, the playwright Euripides, the philosopher Protagoras: all of these impressive intellectual figures, and many more like them, had set out their stall against the chicanery and superstition they identified in prophecy, and against the ‘cynical excesses of professional prophets’ (many of whom had gained a reputation as money-grubbing charlatans desperately trying to augur their way to a quick buck).

Within this climate of cool, dispassionate fifth century rationalism, Sophocles comes down for prophecy (and not just for prophecy, says Knox, but, by implication, for the whole traditional religious worldview of which prophecy can be taken as an instantiation). Tiresias, the strange and mystical prophet, is shown by Sophocles to be radically right in his dealing with Oedipus, while Oedipus the arch-rationalist with political power on his side is revealed to be radically in error.

The man who rejected prophecy, Knox says, is the living demonstration of its truth: the rationalist at his most intelligent and courageous is the unconscious proof of divine prescience. This reversal is fully realised when, before he discovers his identity, Oedipus rejects Jocasta’s claim that ‘man must live by chance’. After having made his shattering discovery, however, he comes full circle, proclaiming himself a ‘son of chance’. Chance stands here to indicate the absence of human control over ultimate reality, rather than mere randomness, I think.

Knox also makes the perceptive point that the story of Oedipus would be – frankly – uninteresting and untragic if Oedipus were simply a bad man. The fact that he is a good, rational man is what makes his character and his experience so compelling. Indeed, in one sense, Oedipus is not really at fault at all: he learns his ignorance (and is determined to learn it, as the good rationalist should), even as – by doing so – he comes to appreciate the reality of divine prescience and the existence of an order beyond his understanding. The importance of learning to know what you don’t know: this, admittedly, is a doctrine that also has good fifth century Athenian credentials in the teaching of Socrates.

At any rate, Knox’s big claim is that Oedipus’ discovery of his identity is both a catastrophic defeat (for him personally, but also for his determinedly rational worldview), and also – paradoxically – a great victory. This, then, is what makes him such a complex and great hero. I’ve found it difficult not to sympathise with these arguments – and I sense already that my enthusiasm for the play is beginning to be rekindled.

3 thoughts on “Oedipus the Hero”