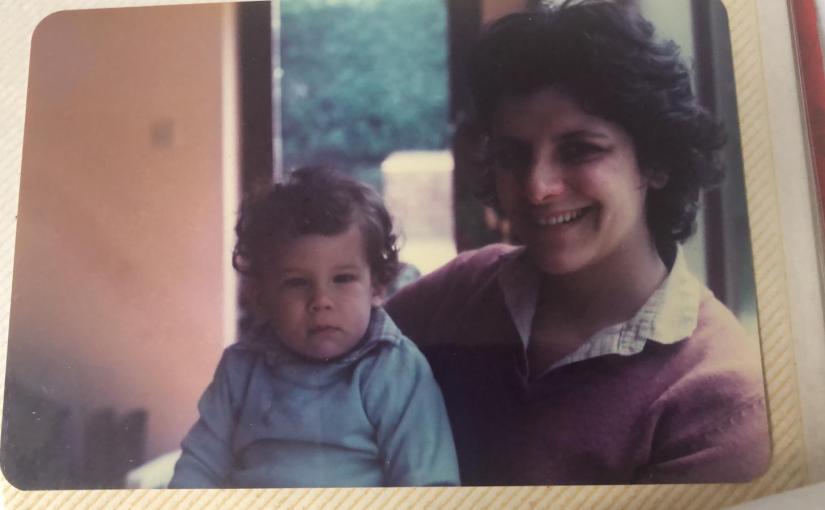 I have wondered about sharing this but I have decided to do so despite some reservations. Part of my vocation as a teacher is to be a real human being for my pupils and, if I’m to live this out properly, it means being a real human being in the world at large. That’s what I take it to mean, anyway. Here then is a transcript of the eulogy I gave for my mother’s funeral just over 18 months ago now. It was in some ways the most difficult, sad and strange thing I have ever written; in others it was the easiest, happiest and most natural. I share it today on Mother’s day and as a record for all future Mother’s days. It’s an attempt to do some justice (however necessarily incomplete) to the life of a special person who will always be much missed.

One of my mother’s simple joys over recent years was to come here, to this church, to worship. She found it to be a warm and friendly place, and a space of special beauty. It is a place and a community that expresses the kind of Catholic, the kind of person, she was: open, kind, thoughtful and generous.

As many of you will know, Doreen Susan Foti was born in Boston, Massachusetts in April 1952. She was the daughter of an Italian-American family and grew up in what were pretty humble circumstances together with her two sisters, Camille and Connie, her Dad Ralph – Pa – and her Mum, Ethel – Ma. There was also a large extended family in the Boston area. She was an energetic and bright eyed child, intelligent and hardworking. During her teens, she would wake up at 5 or 6am each morning to master her schoolwork. The result of this work ethic was that she was a tremendous success at high school. She accordingly won a full scholarship to Wellesley College, an academically prestigious institution for women attended by the likes of Madeline Albright and Hilary Clinton, among many others. It was a stunning achievement.

But young Miss Foti wasn’t conventionally bookish. She was a city girl, with – according to those who knew her – a breezy confidence belying her years. As a teenager she went to hear the Beatles play when they visited Boston; and she was sure to accompany their performance, as was the custom, with her fair share of screams. She was also a cheerleader for the high school football team: many years later she still remembered the cheers.

One of her contemporaries from her college years remembers being in awe of – to quote –her ‘style, spirit and urban chic’. She led several of her fellow freshmen out on excursions into the city of Boston, teaching them how to use the subway, riding every line and getting off at numerous stops. She knew the city well and she introduced it to her friends; but she also introduced them to her home, where they were fed a memorable Italian meal by her mother.

At just 21, she met a young Englishman who’d come to study in Boston, and who would soon become her husband. Once married, and with undergraduate and Masters degrees safely in hand, she left the US – together with Barry – and made the long voyage to England, which became her home. There were 5 happy years in Cambridge, followed by 25 in Southampton; for the remaining 13 she lived here in London.

Mrs McCormick, as she now was, worked as a clinical psychologist with the NHS for almost 30 years; her training was in Cambridge and Peterborough; but, on first arriving in the UK, she worked also as an undergraduate supervisor for psychology students at several of the Cambridge colleges. My father held a lectureship in the university, but he tells me my mother was an equal focus of attention at the college gatherings they attended together: she was the exotic American that people wanted to talk to. And she was exotic: not just in terms of her country of origin, which in 1970s Cambridge was something of a rarity in a way it wouldn’t be today; or in terms of her sparkling conversation and the insights she brought to High table as a young American just after the Vietnam war. But in terms of her beauty too, with her dark Italian features.

As a psychologist, my mother was in her element. She was a deeply caring person, someone who really wanted the best for anyone and everyone who came into her personal orbit. She had a very calm and patient ear; and, perhaps most importantly, she had a clear sense of what might lie beneath the surface in any given situation, and a willingness to try to bring this out – in a kind way, certainly, but – if possible – without mincing her words.

For much of her professional career, as a child psychologist at Southampton General Hospital, she worked in the most sobering of circumstances: helping children who were suffering from advanced cancer and severe diabetes and their families. I think it’s fair to say that this work left its mark on her. But she found herself able to meet the traumas and sufferings of her patients with gentleness and compassion, doing her utmost to help them work through the distressing circumstances in which they found themselves.

The remarkable calmness, courage and fortitude she displayed when confronting her own illness over the past months was born, at least in part, out of this work. It’s not uncommon that the dying seem to find it possible to deal bravely with their situations, while friends and family find it an altogether tougher ordeal to try to hold themselves together. That was certainly the case in this situation: not once did my mother breathe a word of complaint about her illness; not once did she struggle to face the facts. The anger and anguish which came so naturally to others of us when forced to confront the cruelty of her illness just didn’t take root in her. Misgivings of any sort really didn’t seem to register.

But then she’d been through the whole process so many times before, guiding and helping others to cope with the tragedies they found themselves confronting, living through the horror they were dealing with, alongside them, trying to guide, trying to help. I can only assume she’d managed to gain a kind of perspective the rest of us were always going to lack. Even with this experience behind her, however, her whole outlook over the course of her illness was still quite extraordinary: saintly, even.

It would not be possible to understand my mother without a clear sense of how she was, above all, a person deeply devoted to her family. She was a devoted daughter and sister – even from across the Atlantic ocean – and she was always on the phone to Connie and Camille, in particular. To my brother and I, she was endlessly giving and thoughtful as a mother. Cards and presents were regularly forthcoming – not just on our birthdays – while being at home meant being looked after by Mum: cooked for, fussed over, cared about. She had a special – and distinctly Italian – approach to the role of mother, an approach that mirrored that of her own mother, who’d been the lifegiving heart of her own domestic space. She was fiercely protective of us and utterly unselfish in her devotion as a mother – and she was proud too. This could sometimes feel embarrassing, but we knew how much we meant to her and we were happy to be so cared about. We never wanted for hugs and kisses. And what more could a child ask for than that?

To my father she was a constant and loving companion through 44 years of marriage: a source of wisdom and advice, of humour and fun, and of countless shared memories and delights. The deep love between them was present to the end and I know it remains still. Living in London together had proved exciting: it had meant going together to concerts, plays and operas; eating out and visiting the shops, including her favourite Luisa Spagnoli. And, for my mother at least, it had meant being a city girl once again – although this time, perhaps, not living quite as fast as she had in her youth, when she might be found, for instance, bombing down the highway in her VW Beetle, terrified passengers in tow, with hair flowing in the wind, and not a care in the world.

London life instead meant volunteer work at Westminster Cathedral and taking tours at Westminster Abbey; working for Westminster carers, counselling and helping people with complex personal problems; being part of her book club; seeing old friends and making new ones. It also meant completing her psychology PhD, something she was very proud to do, after all those years in practice. The PhD led to a pamphlet that has been used in the NHS, concerning dexamethasone, a drug used by leukemia sufferers.

Life for her was never dull, and she knew how to live it fully, while always finding a way to give of herself to others. If I were to sum this latter quality up in one sentence, I would say that she was always trying to bring something good into the world, and to the people around her; always looking for a practical way to do something positive. All of us, I would guess, will have known something of this feature of her personality, and of the down to earth but caring matter of factness which was so fundamental to her style.

My mother was many things to many people: a mother, a friend, a confidante; a wife, a companion, a carer; a sister and an auntie; a colleague, a reader of books, and a writer of papers, letters and emails; and, most recently, she became a grandmother. Most of all, though, she was a lover: a lover of life, of the people around her, and of good things. We miss her enormously, and she leaves an irreparable hole in our hearts. But we honour her and her memory if we remember that it simply wasn’t in her character to let sadness win, or to lose all hope; she never lost her faith, even in the most difficult moments. Her whole approach was to ask, in her matter of fact way, what she could do now, that was good, for those around her – and to get on and do it. That’s been my comfort in recent days, and it’s something I have increasingly felt she somehow managed to leave deeply imprinted in me, in a way I will always, I think, have with me. Perhaps others will feel in some way similar; if so, I hope it will be of some comfort to you, too.

3 thoughts on “Eulogy for a Mother”