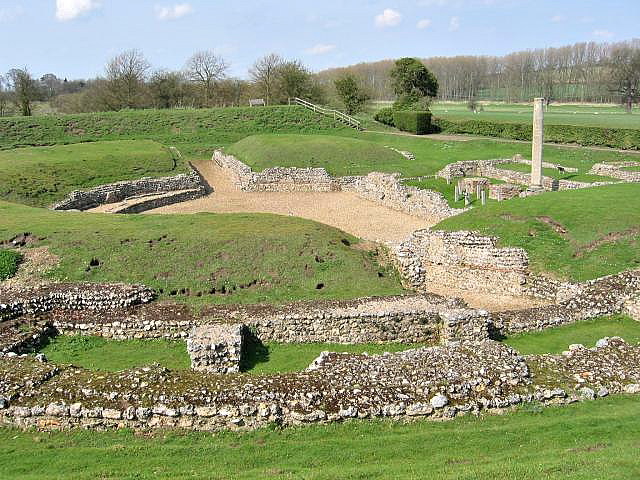 Last week two of us Classics teachers accompanied my class of 12 year olds to the Roman remains of Verulamium in St Albans. It’s a fun trip to make, though on this occasion the weather was pretty grisly, which made walking around the site of the ancient town a bit less enjoyable than usual.

The pupils particularly enjoyed seeing the Roman theatre, parts of which have been pretty well preserved, and testing out its acoustics. Next to the theatre lie the remains of a building which archaeologists have labelled the site of several ‘shops’: a carpentry shop, a bronze worker shop and so on.

I asked my pupils to think about how an archaeologist might be able to arrive at this sort of verdict concerning the nature of a Roman building. Just how much evidence of (e.g.) bronze-working did the archaeologists who dug up this building discover? Had they inferred a great deal from not a lot, or had they not had to do much inferring at all? I didn’t actually know the answer to this question myself (I presume the basis of an answer to it can be found lurking somewhere in one of the 1960s excavation reports).

But just keeping such questions in mind matters, I think, when visiting archaeological sites. Our ancient historical picture of a place like Verulamium really can depend on how we interpret individual pieces of evidence (which might conceivably be understood in a quite different way and with startling implications). For a good example of this, in relation to Verulamium itself, see here.

In the afternoon, we arrived at the Verulamium museum for some artefact handling and a look around the museum exhibits. One of the exhibits – a brief video – prompted me to think again about the challenges of interpreting evidence – this time textual evidence. The video in question pronounced confidently that St Alban had died a martyr in the Diocletianic persecution of the early fourth century. Despite having some familiarity with the history of this period, this wasn’t a claim I’d encountered before – so I did a little digging around later that day and came across a number of interesting findings, which I’ve written up below. Things, in short, are a bit more complicated than the museum exhibit was letting on.

The first surviving document to make any kind of reference to St Alban is a work of Latin hagiography written in 480 AD, which was dedicated to another figure altogether – Saint Germanus, bishop of Auxerre – and was written by Constantius of Lyons. This text makes reference to the tomb of the ‘blessed martyr Alban’. The text makes no reference to any martyrdom, however. It simply recounts that Germanus ‘prayed to God through the saint’ (i.e. with Alban’s intercession) and that he was thus afforded a safe voyage back to Gaul.

A text of the sixth century monk Gildas, written in Latin in Britain, contains the earliest surviving account of Alban’s martyrdom, which he places in the Diocletianic period. In this text, Gildas suggests that Alban hid a Christian confessor in his home and that he then disguised himself as the confessor, thereby saving the confessor from persecution but sacrificing himself in the process.

Gildas writes affectionately of Alban, but his account does not go into much detail. By the eighth century, when St Bede was composing his Ecclesiastical History, a more elaborate story of Alban’s encounter with his Roman persecutors could be told. Was this the product of additional, otherwise unattested source material that Bede had managed to access? Or does it rather reflect an increasingly imaginative engagement with the figure of St Alban on the part of later antique Christians, for whom it mattered to try to enter into the viscerally lived experience of one of their heroes in as much detail as possible?

A common approach among historians is to assume that some version of the latter question is the one most worth asking when considering the development of hagiographical traditions in late antiquity. But the former question can be, and often is, worth posing too. And in this case it is indeed: three manuscripts which seem to predate Bede’s account but which closely match many of its details were brought to light in 1904 by the German scholar Meyer.

In Bede’s more elaborate account, which features (among other things) a dialogue between Alban and the judge who sentences him, references to local topography, and a story about a soldier who blinds Alban, the martyrdom of Alban is placed not during the Diocletianic persecution but during the much earlier reign of Septimius Severus.

In the 12th century account of Geoffrey of Monmouth, however, Alban’s martyrdom is specifically connected with the reign of Diocletian once again.

All of the surviving written accounts of Alban’s life and death were written at something of a remove from the earliest Christian centuries. Geoffrey of Monmouth, in particular, was writing at a considerable distance from the early fourth century. For all their colour, the extent to which these (increasingly elaborate) accounts of Alban’s martyrdom represent the truth about the historical figure who seems to have inspired them is obviously a vexed question. There is also a very large question mark as to whether the persecutions under Diocletian ever took place in the western Roman empire (it is clear there were at least some persecutions in the east, but good reasons to doubt that they also happened in the west). These are the sorts of vexed questions that bedevil the study of very many early Christian figures and the written accounts that purport to record their experiences.

What can be said with conviction, I think, is that the museum exhibit I chanced upon at Verulamium was just a bit too confident in its definitive placing of St Alban’s death in the reign of Diocletian (and thus too confident too in the trustworthiness of Gildas and Geoffrey of Monmouth).*

*For the history of the development of the written accounts of St Alban’s life and martyrdom, I relied here on the introductory chapter of J. Van der Westhuizen (1974), The Lives of St Alban and St Amphibal by John Lydgate, which can be accessed digitally here. Relevant portions of the Latin texts of Constantius, Gildas and Bede are all included.

**For my pupils, I hope this post can serve as an object lesson in why you should try to read and listen in a questioning frame of mind, even in contexts you might usually consider reliable. I hope it helps also to show that summaries in places like Wikipedia – which has an extended, and in some ways quite helpful, section on St Alban – might be in important ways misleading.