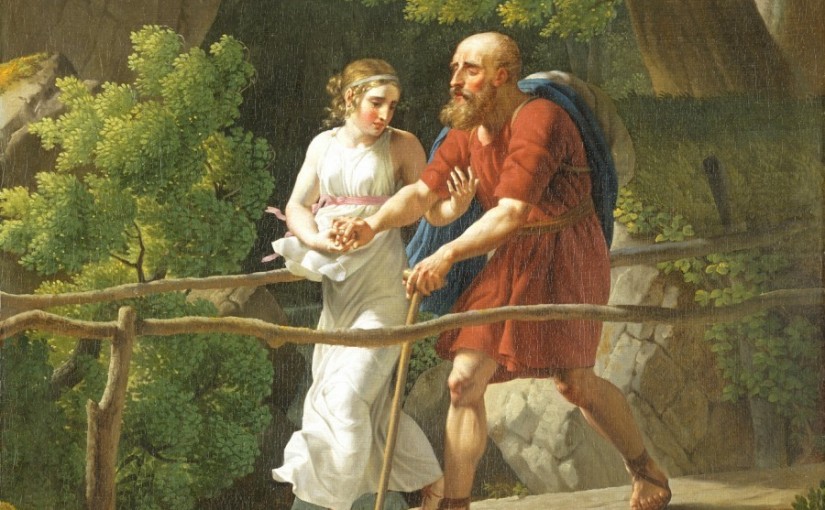 One of Bernard Knox’s major suggestions in the opening chapter of Oedipus at Thebes (his major study which I have already begun to discuss in a previous post here) is that Sophocles’ Oedipus, despite being a king, seems to have a ‘democratic temper’. Knox explores this feature of Oedipus’ character, and indeed other ‘democratic’ features of Sophocles’ play, at length in his book’s second chapter.

He makes a rich and bold argument – which he establishes through close reading – to the effect that the tragic story of Oedipus the man resembles the tragic situation of Sophocles’ own contemporary Athens. The play itself, he suggests, is a tragic vision of Athenian splendour and vigour but also of the city’s inevitable military and political demise. Oedipus himself, moreover, is constructed as a character to embody the qualities – but also the limitations – of Athens itself.

In this post I am going to sketch the main outlines of Knox’s argument, before offering some suggestions of my own. Although I find it fascinating, I am not completely convinced by Knox’s argument that Oedipus as a character can somehow be said to embody in microcosm the Athenian cultural and political mindset.

Knox begins his discussion by focussing on the word ‘tyrannos’, which is used to describe Oedipus throughout the play. Why is Oedipus described as a tyrannos (tyrant) rather than a king (basileus)? One part of the answer here is that Oedipus emerges, over the course of the play, as a tyrannos.

Tyrannies were no longer a live political reality in fifth century Greece (when Sophocles wrote). Nevertheless, they were remembered by citizens of the Athenian democracy as a very bad thing. Indeed, to guard against the possible re-emergence of tyranny in the city, anyone seeking to restore tyranny to Athens itself was cursed in recitals of prayers in the city assembly (ecclesia).

The moment in the play where Oedipus’ credentials as tyrannos come most clearly to light, perhaps, is in the aftermath of his discovery of the terrible truth about himself, when the chorus comes to know him as tyrannos – someone they describe as a man of violence and pride’ (line 880). The chorus, previously supportive and even in awe of Oedipus, reaches this judgment on the basis that much that is new (to their ears) has just been revealed about him. That he had come to Thebes with blood on his hands; that he had killed at least one man of some importance; that his response is to say – with apparent pride: ‘I killed the whole lot of them’. Oedipus has revealed himself as having some of the characteristic hallmarks of a tyrannos: the citizens of mythical Thebes react negatively to these, just as the citizens of democratic Athens will doubtless have done too.

Knox notes, however, that there are plenty of good reasons for the chorus (and the audience) not to cast Oedipus as tyrannos: Oedipus doesn’t outrage his city’s women; he doesn’t break any ancestral laws; he doesn’t plunder from his people; he doesn’t distrust what is good and delight in what is bad; and he doesn’t live in fear of others around him. And, as already noted, he has a ‘democratic temper’! How, then, is this apparent contradiction to be resolved?

For some fifth century Athenians, it was possible to speak of the city of Athens itself as a tyranny. Pericles, as reported by Thucydides, gives voice to this very idea in his funeral speech: ‘we are called a democracy, but you call tyrannis to mind’. Other fifth century authors use this same language.

For Knox, this is the key to understanding the tensions within Oedipus’ own character in the play: he is just like Athens, a citizen body and political state in which elements of both democracy and tyranny – and the perception of each – co-exist.

Knox sees Sophocles, then, as writing ‘not historical but contemporary drama’. He points to the overlaps between (mythical) Thebes and (Sophocles’ contemporary) Athens in the play: common to both cities are their use of ships and their use of nautical language, common to both is the experience of plague, and there are important resemblances too between Oedipus and the figure of Pericles, the great Athenian leader.

But further than this, Knox suggests, the character of Oedipus and the character of Athens (in terms of its self-identity as a city) can be viewed as in essential harmony: ‘the character of Oedipus’, he writes, ‘is the character of the Athenian people’. A long list of parallels is enumerated: both Oedipus and Athens are busy and courageous (and pride themselves on both qualities); both take pride also in their powers of speedy decision making and their intelligence, their impatience and their confidence in discussion as a preparation for action. Both also have a keen nose for plots and conspiracies, for acting with confidence as good amateurs who can snuff out the pretensions and mistakes of ‘professionals’. Both are also capable of serious anger.

Knox fleshes out these parallels with reference to the writing of a range of fifth century Athenian authors. More specifically, he suggests that our literary portrayals of a range of leading Athenian citizens – Pericles, Cleon, Themistocles – also invite comparison with Sophocles’ Oedipus.

The final part of Knox’s argument that the play as a whole is an exemplification of Athenian values concerns the legal/legalistic investigation that Oedipus conducts as he interviews those around him in search of the cause of his city’s pollution. Athens, Knox observes, loved its legal institutions, traditions and arguments. In the perspective of some outsiders, Athens was a ‘city of lawcourts’. He goes on to enumerate a range of parallels between Athenian legal processes and those we see in Oedipus (the behaviour of boards of judges, Tiresias’ assertion of his right to a defence speech, Oedipus’ forensic tone, various procedural similarities, the treatment of witnesses etc.). There are indeed many parallels.

For me, Knox’s analysis in all of the above respects is both interesting, well done and convincing. However, for me, there is one major question mark that threatens his overall position. Just how thoroughgoing is Sophocles’ use of themes, character traits and political and legal parallels likely to have been? Was he really trying to create an Oedipus who stood to represent Athens? Or can this quite bold hypothesis be resisted simply by saying that Oedipus can indeed seem very Athenian in certain sections of the play, while pointing out that this – arguably – is pretty much inevitable. If Sophocles is going to depict Oedipus as a figure who will seem heroic in the eyes of his fifth century audience, how can he do this unless he presents an Oedipus whose heroism matches – in some degree – Athenians’ own ideas about heroism?

There is all the difference in the world, I think, between an Oedipus who is designed to appeal in various ways to Sophocles’ audience, and who indeed exemplifies some of the qualities that Athens itself took pride in – and an Oedipus who is the very personification of Athens itself. I am sceptical, then, with respect to the bolder part of Knox’s reading, even as I am impressed by the force of his analysis.

*The featured image is ‘Oedipus and Antigone’ by Christoffer Wilhelm Eckersberg