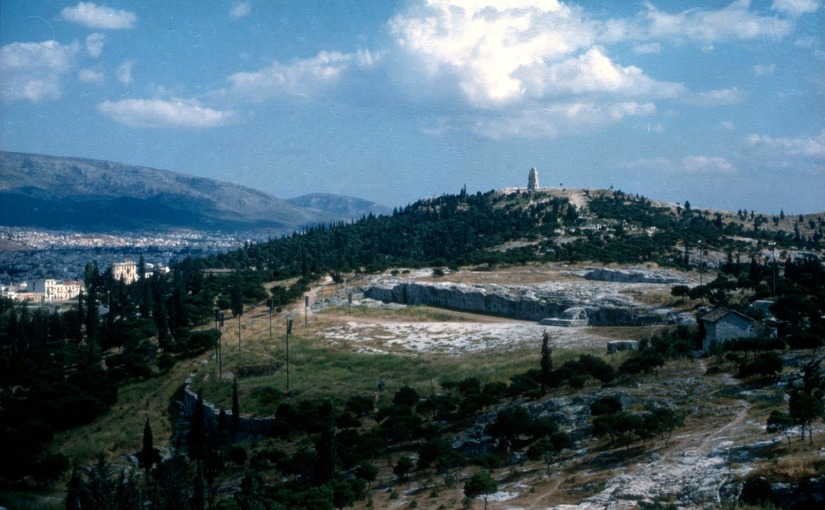 In Book 6 of Plato’s Republic, in the context of a damning appraisal of the way the democracy at Athens works, Socrates compares the Athenian state to a ship. The owner of the ship, he says, is big and strong – but he is hard of hearing, shortsighted and not much of a navigator. The ship’s crew are in persistent disarray. They recklessly gorge themselves on the ship’s resources, while disagreeing with one another about who should be in charge on board, with each sailor believing he should be the captain (despite having neither experience nor training). Being the captain, the sailors maintain, requires no special skill (Gk. techne).

In this analogy, the citizen population of Athens are the owners of the ship. In Plato’s candid assessment, they are politically powerful but lacking in governmental acumen and intellectual ability. With them in charge, the Athenian ship is not going to cut a clear, sensible or efficient path.

The crew of the ship, meanwhile, are the disputatious demagogues and politicians who hold sway in Athens’ political assembly, each vying for influence and power over their fellow citizens.

Plato wants his fellow Athenians to undertake a thoroughgoing revaluation of the way things on board work. Rather than looking to the ship’s owner, or to themselves, he thinks the sailors on board the Athenian ship should look instead to a marginal, currently powerless figure whose quiet presence on board is regrettably overlooked: this figure he calls the ‘true navigator’. This true navigator is a person of great learning, wisdom and moral fibre: a philosopher.

My doctoral supervisor once told me of how she had been campaigning to try to get philosophers onto many of the various university decision-taking panels and boards she had contact with. Decisions rely on philosophical judgments: even if philosophers present on decision-making panels weren’t themselves making such judgments, might they nonetheless be able to advise those who were about philosophical issues and questions which arose in the course of a given set of deliberations?

I don’t know if this argument ever gained any traction but it is a good example of how – in our society too – philosophers’ voices are usually pretty marginal to the way things in the arena of practical affairs proceed.* Indeed, we even use the word ‘philosophical’ in everyday speech to describe people who have a calm attitude in the face of disappointment: in common parlance and the popular imagination, then, being ‘philosophical’ is certainly not something you openly do when successfully pulling the levers of worldly power.

Plato’s fellow Athenians would also have been surprised by his suggestion that philosophers, of all people (and whether they could lay claim to being true philosophers or not), are the best placed group of people to run a city-state. Philosophers at Athens, by Plato’s own admission, were not the most popular of individuals. In the estimation of the majority of Athens’ ordinary citizen population, he himself suggests, philosophers served no self-evidently useful purpose.

On one level, this is easy enough to understand: philosophers in ancient Athens tended to earn their livings by presiding over the higher education of a select group: the wealthy young men of the city. An education in philosophy was thus an education in a form of high culture. If most people found themselves able to make do without it, just how valuable to them could it be?**

Plato doesn’t offer anything like the sort of sociological explanation for most ordinary Athenians’ remoteness from philosophy that I have just presented. Instead, he offers a moralistic explanation. In the Republic, philosophers are marginal figures in Athens simply because most people don’t approach them in the right spirit.

Philosophers are like doctors of the soul, Plato says (Rep. 489b), using a further analogy. The ‘sick’ man should have the wherewithal to go to the door of these doctors: it’s certainly not incumbent on the doctors to go around canvassing for their patients! What ordinary Athenians ought to do, Plato thinks, is to recognise their own dire need of good politicians – they are sick, after all – and to respond accordingly (by knocking on the doors of the philosophers in their midst).

I can almost find in this passage a humorous patrician hauteur (the hauteur is clearly there; the humour just possibly). The idea is that the less well-educated ought simply to recognise their need for intellectual instruction from the neighbours they perceive as effete and unworldly and then take steps to address it. This is an idea that is certainly of a piece with the picture sketched in the analogy to the ship: there the sailors need to acknowledge their own reckless and grasping behaviour if they are ever to stand a chance of benefiting from the wisdom of the navigator on board.

The analogy of the ship thus forms part of Plato’s broader argument, but it encapsulates many of his key points on politics in general – on the state of Athenian society, on the inadequacy of democracy as a form of government, and on the nature of the alterations to it that he would like to see. To what extent might these assessments, particularly in the form in which they are outlined in the analogy of the ship, have been convincing to his fellow Athenians?

A very brief answer here might be that, if they had cared to reflect on it, Plato’s analogy would likely have seemed a rather loaded one. Ancient ships would indeed have had just one captain – but democracy in ancient Athens plainly didn’t have just one officially recognised leadership figure, even if a figure like Pericles might emerge periodically as a particularly important political influencer. The fact that modern representative democracies do have officially recognised overall leadership figures – whether e.g. presidents or prime ministers – represents just one clear point of contrast with democracy at Athens.

The analogy of the ship arguably allows Plato to make his argument that only very few people should be able to control the state just a bit more effectively. He manages to insinuate that Athenian ships – a large number of which would have been involved in their navy, a much celebrated force which provided the city with its political and military strength – function so effectively precisely by using a non-democratic (and very hierarchical) model. Leading figures in the Athenian army and navy were not selected by lot for their posts (and yet they – mostly – performed their roles to the satisfaction of their fellow citizens, while presiding over a flourishing institution). This was exceptional in Athens: most public positions involved selection by lot.

Many Athenians would not, we can guess, have shared Plato’s damning assessment of the limited capacities of the owner of the ship, or the sailors on board, in his analogy. And as I have suggested, by Plato’s own admission they would have baulked at the idea that highly-skilled philosophers were the right people to have in charge of their political affairs.

This is not to dismiss tout court the potential of Plato’s analogy to appeal to his readers. Equally, it seems unlikely to me that in offering his criticisms of the workings of Athens’ democracy, Plato was mounting a serious attempt to convert all of his fellow citizens to his point of view.***

*At least, that is, on a surface level. The ideas and/or influence of philosophers, in one form or another, often lie hidden and unacknowledged within the moral reasoning people employ.

**One group of teachers – the sophists – had a short and effective answer to this question: it will enable those who learn it to argue well and make convincing points in public meetings of the democratic assembly. Plato himself regarded this as charlatanism: doing philosophy, for him, was emphatically not about learning how to make popular arguments.

***This post was written to accompany an earlier post on Plato’s political philosophy: Democracy and the Totalitarian Threat: from Plato to Popper via Arginusae.