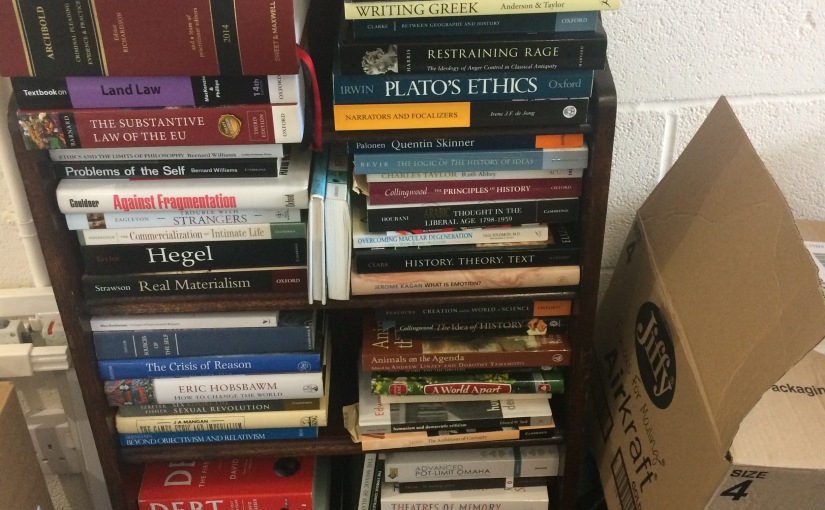 The summer holiday has arrived and it’s time to refresh, relax and (in our case) catch a breath and finish the process of moving in to a new place. One activity that will be very much part of this routine will be the removal of various books from my shelves.

As the years pass and more books accumulate, shelving space is increasingly at a premium. It makes sense, then, to try to pass on to others (either through charity shops or online sales) the books I don’t intend to read or rely upon again.

There’s something cathartic about doing this, deciding what will stay and what will go. Exercising control over what belongs on my shelves feels like an enjoyable assertion of my own free will: I’m not going to be kept in thrall by those books I don’t/didn’t enjoy is the thought, and I can follow the thought with decisive action.

In this post I’ve tried to force myself to reflect pretty candidly on the different reasons why the books I’m selling no longer seem to belong on my shelves. Here below is a picture of the books I currently have available for purchase (as displayed on a shelf I’ve allocated to them in the garage). They cover a whole range of subjects, from ancient philosophy to land law to psychology to an educator’s memoir. Below that is a summary of the various reasons why they’re for sale.

a) Books which served a purpose and are not needed anymore: the primary examples here are the law books – mostly textbooks. In some cases they’re now quite out of date, in a field where new textbooks are published each year, and in most cases they’re available pretty cheap. I do retain some books from my period of legal studies – like Treitel’s classic treatise on the Law of Contract, and a textbook on company law (a nice study aide when I wrote a successful mini-dissertation on minority shareholder remedies), but I don’t envisage an imminent need for detailed reading material on criminal, EU, or tort law. Those, then, can go.

b) Books that excited me at the time but that don’t anymore: in this category I’d include some of the philosophy books – Bernard Williams’ Problems of the Self (a collection of essays) and Bernstein’s Beyond Objectivism and Relativism. Arlie Hochschild’s Commercialisation of Intimate Life, a sociological book with some interesting observations, also falls into this category, as do some history books, for example Mark Bevir’s The Logic of the History of Ideas and RG Collingwood’s classic study, The Idea of History. In each case, these books (or at least parts of them) were enjoyable when I first read them, but I can’t imagine returning to them again anytime soon. Partly, this is because my interest in philosophy itself has dwindled over the years: my reading tastes now focus more on biography and various types of history. Why? I’m not exactly sure but there has certainly been a more general shift from the abstract to the concrete in my choice of reading material over the years (philosophy and theology out; politics, economic history and biography in).

c) Books I didn’t enjoy or couldn’t get into: this is perhaps the biggest single category of book on the shelf. Of course, there are probably a lot of books like this on any avid reader’s shelves – and many such books remain, in fact, on my own ‘not for sale’ shelves, mainly because they could be useful as works of reference, or because I might want to give them a second chance. On this shelf, my recently purchased copy of John Cooper’s Pursuits of Wisdom, a sort of primer of ancient philosophy, which just doesn’t flow, is an example of the type; so too Charles Taylor’s large book on Hegel (Taylor picks fascinating topics in his books – many of which I own – but his prose style can be long-winded and trying); so too David Graeber’s book Debt (which held me for the first 10 or so pages before I found myself getting too frustrated with the assumptions he was making). Graeber is almost the opposite of Taylor in terms of prose style: he’s overly punchy. Others? Edward Said’s book on Humanism and Democratic Criticism was okay, but I have better books of his in my possession (and worse: On Late Style was a particularly disappointing read); John Burrow’s Crisis of Reason: European thought 1848-1914 addresses a fascinating topic but does so in a very stodgy way; Terry Eagleton is usually very readable but Trouble with Strangers: a study of ethics is among the least enjoyable of his books – its argument patchy, its prose not as luminous as that of his other books, and ethics is hardly his special field anyway; as for Galen Strawson’s Real Materialism (a collection of philosophy essays), I found both the writing and the subject matter more or less impenetrable.

d) a subset of c): Classics books that didn’t work for me. Here some examples are Neville Morley’s Antiquity and Modernity (a great topic, but the approach of the book didn’t speak to me at all), Irene de Jong’s Narrators and Focalizers (very dry) and Jonathan Hall’s Hellenicity (an interesting argument about the development of Hellenic identity, but a dense read: too dense for me at any rate). William Harris’ book on the Ideology of Anger Control in Classical Antiquity was another case of an interesting topic that wasn’t a particularly absorbing read (Harris’ other books, which unfortunately are very expensive, read really well, by contrast). Garth Fowden’s Egyptian Hermes – on Hermes the thrice-great – is the definitive treatment of its topic, but again it’s too dense for my tastes and it didn’t feel like an effort was made to bring the subject alive.

e) books it makes commercial sense to sell – I would be quite happy to keep hold of my copy of the collection of essays on Gender and the Body in the Ancient Mediterranean, edited by Maria Wyke, but if I can make £35 for it (and in advertising it for that price, I am the cheapest would-be seller online) I’ll gladly take the money (the book was purchased years back for £7).

f) books whose wisdom I no longer need: Mike Carot’s book of poker tells and Hwang’s book on pot limit omaha fall into this bracket. Read into that what you will… Also Terence Irwin’s book on Plato’s Ethics is surplus to requirements because this subject is fully covered in a different book I own by the same author (The Development of Ethics, volume 1). A further example here is the collection of essays on animal ethics: I’ve been a fully signed up vegetarian for a number of years now and no longer need to be convinced of the ethical case for vegetarianism.

g) Books I reviewed (somewhat ruefully): I spent far too long wondering about how to review two books on the shelf for journals (a book about the theology of Henri de Lubac and one about gender and ancient religion). These books hold particular memories. Influencing my approach to both reviews was the comment of Mary Beard that ‘you shouldn’t write anything in a review that you wouldn’t say to someone’s face’. Well, maybe I’ve grown bolder over the years but I’d certainly review both books quite differently now if I were to do so again. In one of the books, for instance, there were issues with dryness, unshapely sentences, jargon and the ‘so what?’ question (i.e. what does this matter?). None of this was mentioned in the review. With the collection of essays, there was an attempt to tie the essays together under a single banner which didn’t really work (the essays covered different topics in quite distinct ways and bore only the loosest of relations to one another) This is a common complaint of many reviewers of such volumes but it’s one my review didn’t manage to touch upon. I suppose I feel now that life is short and that these are the sorts of things (among others) that should just be said without hesitation if they’re what a reviewer feels – and let the chips fall where they may.

h) Duplicates: I already possess JA Mangan’s excellent book on the Games Ethic and Imperialism – an exploration of the place of sport in British education in the 19th century – so this copy is for sale.

So that’s a rough – and admittedly candid, though hopefully not too curmudgeonly – summary of the reasons these books are for sale. I hope I didn’t put you off making a purchase!